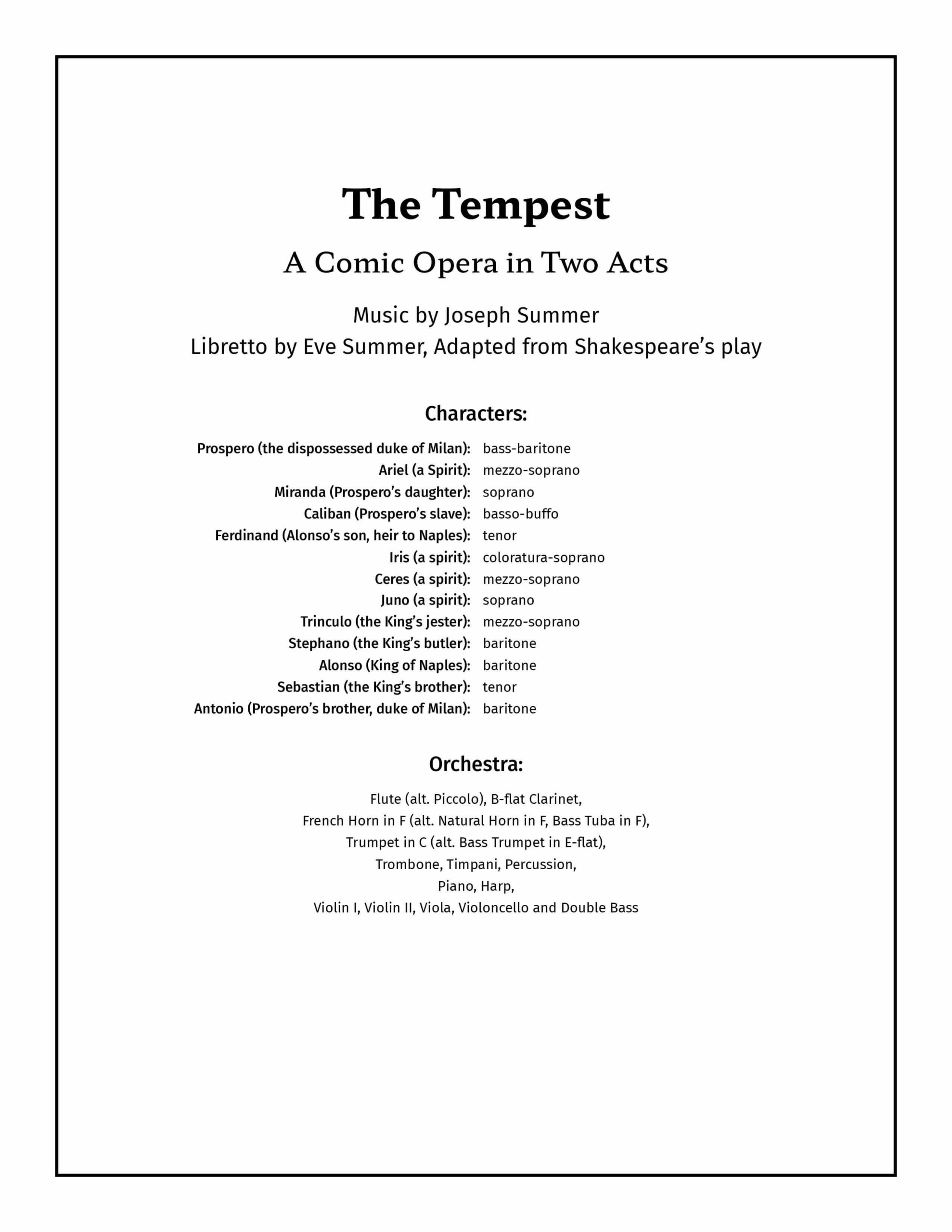 I want everything I write to be true and nothing I’ve written could be truer than The Tempest. Everything that Shakespeare limned in the play is about the life of my family, in fine detail. It’s not as if incidents of The Tempest make brief appearances, or indeed, happen only once. The plot elements embrace us repeatedly. In the early nineties, my family (my wife, my daughter, and myself) was banished from Tennessee. We fled to the Virgin Islands, and lived there for several years until our banishment was repudiated and we were justly compensated in words, deeds, and riches for our travails by a publicly chastised state government. While exiled in the West Indies I began writing songs based on Shakespeare texts. If By Your Art My Dearest Father, a plea made by Miranda to her father Prospero in which she insists her father cause a storm at sea to cease, was my first stab at The Tempest; and was inspired by a plea my daughter, Eve, made to me on a day she was planning to go to a party at Magen’s Bay, a beautiful beach less than a mile from our apartment. Eve, who was shy of nine, told me that she would be angry with me if it rained and ruined the festivities. After I fruitlessly debated with her the merits of her perspective, I began work on a song for voice and harp, which I subsequently adapted for the opera’s opening number. The skeptic asks, what about a brother? The Tempest isn’t The Tempest without Prospero’s brother also being stranded on the magic isle. Of course, my brother Mitchell was there in the West Indies, too; and even before that my brother and I sojourned on desert islands in the Caribbean; climbing up from beaches whence I’d speared our fish for dinner, through a chartreuse jungle to our wooden shack. (Lest Mitchell complain about an omission, I confess it was his spear gun I borrowed to hunt the snappers.)

When Eve was a child I would quiz her on the characters of The Tempest. She memorized the entire play before she was nine (and several other Shakespeare comedies.) Prior to her marriage, a marriage I contrived, I wrote the Goddesses scene – which occurs near the end of the second act – as an epithalamion for Eve’s wedding to Ferdinand – sorry, not Ferdinand – Andrew. Shortly after her marriage I insisted that she construct a libretto for The Tempest, so that I might finish a project that seemed to have begun when I was a child.

When I was seven, I wrote my first piece, an opera, titled, The Ship of Doom. It was scored for French horn and piano. I forgot to include voices, but I was seven. And unlike Eve, at that age I had no familiarity with Shakespeare’s plays. Nor did Shakespeare have any familiarity with me, yet how else explain the bard foreseeing storm-tossed boats falling apart under my family’s feet (on two occasions, both times ending innocuously,) or how he guessed Caliban’s lecture on catching fish barehanded would be something I too would lecture on, or that my skill as a guddler would save my life when my wife and I were left adrift in the Indian Ocean and had to fend for ourselves by swimming through a swarm of venomous sea creatures, ten foot waves, and powerful currents that constantly pulled us back towards the open ocean before careening through jagged coral onto a desolate beach as stony as An Cladach. My wife, Lisa, and I sustained ourselves during our misadventure in the Indian Ocean by eating live snails, scamels on the rocks as Caliban explains; and, while I suffered from the aftereffects of a too rapid ascent from deep water (visited earlier, and which precipitated some of our peril,) Lisa cradled my head and assuaged my pain with the love of devoted Ariel. If the opera pleases you, it is because it was not so much crafted by me as it was my life that was crafted by The Tempest.

Recitals of music inspired by the immortal bard: from original English text settings to settings in translation by composers from the classical period to the 21st century.